Topics Details
Control
Remedy
Topics Details
A blood type (also called a blood group) is a classification of blood based on the presence or absence of inherited antigenic substances on the surface of red blood cells (RBCs). These antigens may be proteins, carbohydrates, glycoproteins, or glycolipids, depending on theblood group system.

There are four main blood groups (types of blood): A, B, AB and O. Your blood group is determined by the genes you inherit from your parents.

Each group can be either RhD positive or RhD negative, which means your blood group can be one of the eight types shown below (see the Rh system).

Your body carries around four to six litres (7 to 10.5 pints) of blood. Blood is made up of red blood cells, white blood cells and platelets in a liquid called plasma.

Plasma is about 90% water, but also contains proteins, nutrients, hormones and waste products. Blood is made up of about 60% plasma and 40% blood cells.

Each type of blood cell has a specific role to play:

Your blood group is identified by antigens and antibodies in the blood. Antibodies are part of your body’s natural defences against invading substances such as germs.

Antigens are protein molecules found on the surface of red blood cells. Antibodies are proteins found in plasma. Antibodies recognise anything foreign in your body and alert your immune system to destroy it.

There are four main blood groups defined by the ABO system:

Almost half (48%) of the UK population has blood group O, making this the most common blood group.

Receiving blood from the wrong ABO group can be life threatening.  For example, the anti-A antibodies in a recipient with group B blood will attack the group A cells if transfused to them. This is why group A blood must never be given to a group B person.

As group O red blood cells don’t have any A or B antigens, it can safely be given to any other group.

The NHS Blood and Transplant website has more information about the different blood groups.

About 85% of the UK population is RhD positive (36% of the population has O+, the most common type).

In most cases, O RhD negative blood (O-) can safely be given to anyone. It’s often used in medical emergencies when the blood type isn’t immediately known. It’s safe for most users because it doesn’t have any A, B or RhD antigens on the surface of the cells, and is compatible with every other ABO and RhD blood group.

To work out your blood group, your red cells are mixed with different antibody solutions. If, for example, the solution contains anti-B antibodies and you have B antigens on your cells (you are blood group B), it will clump together.

If the blood doesn’t react to any of the anti-A or anti-B antibodies, it’s blood group O. A series of tests with different types of antibody can be used to identify your blood group.

If you have a blood transfusion (where blood is taken from one person and given to another), your blood will be tested against a sample of donor cells that contain ABO and RhD antigens. If there’s no reaction, donor blood with the same ABO and RhD type can be used.

Pregnant women are always given a blood group test. This is because if the mother is RhD negative but the child has inherited RhD-positive blood from the father, it could cause complications if left untreated. 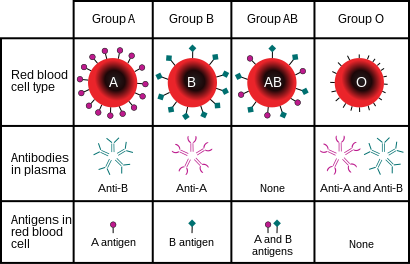 Although all blood is made of the same basic elements, not all blood is alike. In fact, there are eight different common blood types, which are determined by the presence or absence of certain antigens – substances that can trigger an immune response if they are foreign to the body. Since some antigens can trigger a patient’s immune system to attack the transfused blood, safe blood transfusions depend on careful blood typing and cross-matching.

There are very specific ways in which blood types must be matched for a safe transfusion. See the chart below:

Some patients require a closer blood match than that provided by the ABO positive/negative blood typing. For example, sometimes if the donor and recipient are from the same ethnic background the chance of a reaction can be reduced. That’s why an African-American blood donation may be the best hope for the needs of patients with sickle cell disease, 98 percent of whom are of African-American descent.
It’s inherited. Like eye color, blood type is passed genetically from your parents. Whether your blood group is type A, B, AB or O is based on the blood types of your mother and father.
This chart shows the potential blood types you may inherit.

What is normal blood made up of?

These can be seen under a microscope and make up about 40% of the blood’s volume. Blood cells are divided into three main types:

This is the liquid part of blood and makes up about 60% of the blood’s volume. Plasma is mainly made from water but also contains many proteins and chemicals. Antibodies are one of the types of protein found in plasma.

The most important blood groups in transfusion are the ABO blood group system and the group D of the Rh system.

Blood groups or antigens are determined by either sugars or proteins on the surface of the red blood cell. The ABO system has A and B antigens and the Rh system has many antigens but D is the most important.

There are 35 blood group systems. This means a person who is A Rh D positive may also be K positive (Kell system), M and N positive (MNS system) and Fya positive but Fyb negative (Duffy system) and so on.

If you have blood group A then you have got the A antigen on your red cells.

Blood group B means you have the B antigen, while group O has neither, and group AB has both A and B antigens.

Group O has neither A nor B antigens on the surface of their red cells so red cells of this group can be given safely to any other group. This is why group O donors are known as ‘universal red cell donors. Group O makes both anti-A and anti-B antibodies.

The ABO system has associated anti-A and anti-B antibodies, antibodies being the body’s natural defence against foreign antigens. These antibodies are found in the plasma and are unusual in that they are ‘naturally occuring’ so they don’t need to be stimulated – such as by having a transfusion or during pregnancy. This means that blood from someone with blood group A contains anti-B antibodies.

Giving someone blood from the wrong ABO group could be life-threatening.

For instance, the anti-A antibodies in a recipient with group B blood group will attack the group A cells if this transfused to them. This is why group A blood must never be given to a group B person.

The Distribution of Blood Groups

The chart below explains the distribution of blood groups within our donor base and the issue of blood to hospitals. It’s important that we collect enough of the right type of blood in the right quantities to meet the needs of hospitals and patients across England and North Wales.