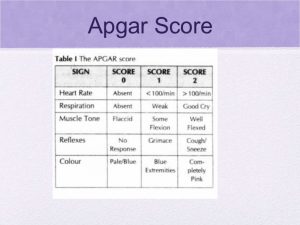 Definition of Apgar score. Apgar score: An objective score of the condition of a baby after birth. This score is determined by scoring the heart rate, respiratory effort, muscle tone, skin color, and response to a catheter in the nostril. Each of these objective signs receives 0, 1, or 2 points.