Deep vein thrombosis can develop if you have certain medical conditions that affect how your blood clots. Deep vein thrombosis can also happen if you don’t move for a long time, such as after surgery, following an accident, or when you are confined to a hospital or nursing home bed.Deep vein thrombosis, or deep venous thrombosis, (DVT) is the formation of a blood clot(thrombus) within a deep vein,[a] predominantly in the legs. Non-specific signs may include pain, swelling, redness, warmness, and engorged superficial veins. Pulmonary embolism, a potentially life-threatening complication, is caused by the detachment (embolization) of a clot that travels to the lungs. Together, DVT and pulmonary embolism constitute a single disease process known as venous thromboembolism. Post-thrombotic syndrome, another complication, significantly contributes to the health-care cost of DVT. Prevention options for at-risk individuals include early and frequent walking, calf exercises, anticoagulants, aspirin, graduated compression stockings, and intermittent pneumatic compression.

In 1856, German pathologist Rudolf Virchow postulated the interplay of three processes resulting in venous thrombosis, now known as Virchow’s triad: a decreased blood flow rate (venous stasis), increased tendency to clot (hypercoagulability), and changes to the blood vessel wall. DVT formation typically begins inside the valves of the calf veins, where the blood is relatively oxygen deprived, which activates certain biochemical pathways. Several medical conditions increase the risk for DVT, including cancer, trauma, and antiphospholipid syndrome. Other risk factors include older age, surgery, immobilization (as with bed rest, orthopedic casts, and sitting on long flights), combined oral contraceptives, pregnancy, the postnatal period, and genetic factors. Those genetic factors include deficiencies with antithrombin,protein C, and protein S, the mutation of Factor V Leiden, and the property of having a non-Oblood type. The rate of new DVTs increases dramatically from childhood to old age; in adulthood, about 1 in 1000 adults develops it annually.

Individuals suspected of having DVT may be assessed using a clinical prediction rule such as the Wells score. A D-dimer test may also be used to assist with excluding the diagnosis (because of its high sensitivity) or to signal a need for further testing. Diagnosis is most commonly done with ultrasound of the suspected veins. Anticoagulation is the standard treatment; typical medications include a low-molecular-weight heparin and a vitamin K antagonist. Wearing graduated compression stockings appears to reduce the risk of post-thrombotic syndrome. 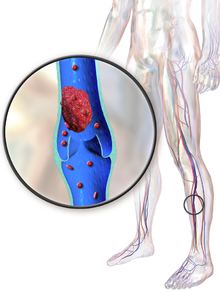 Common signs and symptoms of DVT include pain or tenderness, swelling, warmth, redness or discoloration, and distention of surface veins, although about half of those with the condition have no symptoms.[1] Signs and symptoms alone are not sufficiently sensitive or specific to make a diagnosis, but when considered in conjunction with known risk factors can help determine thelikelihood of DVT.[2] In most suspected cases, DVT is ruled out after evaluation,[3] and symptoms are more often due to other causes, such as cellulitis, Baker’s cyst, musculoskeletal injury, orlymphedema.[4] Other differential diagnoses include hematoma, tumors, venous or arterialaneurysms, and connective tissue disorders.[5]

Phlegmasia cerulea dolens is a very large and dangerous type of DVT.[6] It is characterized by an acute and almost total venous occlusion of the entire extremity outflow, including the iliac andfemoral veins. The leg is usually painful, blue tinged in color, and swollen, which may result in venous gangrene.[7][8] 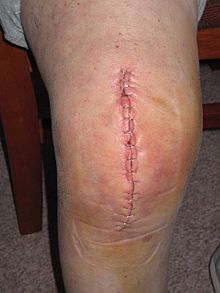 The incision for a completed knee replacement surgery, a procedure that can predispose people to a DVT

The three factors of Virchow’s triad—venous stasis, hypercoagulability, and changes in theendothelial blood vessel lining (such as physical damage or endothelial activation)—contribute to DVT and are used to explain its formation.[9][10] Other related causes include activation of immune system components, the state of microparticles in the blood, the concentration of oxygen, and possible platelet activation.[11] Various risk factors contribute to DVT, though many at high risk never develop it.[12]

Acquired risk factors include the strong risk factor of older age,[10][12] which alters blood composition to favor clotting. Other important acquired risk factors include major surgery andtrauma, both of which may increase the risk because of tissue factor from outside the vascular system entering the blood.[9] In orthopedic surgery, venous stasis may be temporarily provoked by a cessation of blood flow as part of the procedure.[11] Cancer can grow in and around veins, causing venous stasis, and can also stimulate increased levels of tissue factor. Pregnancy causes blood to favor clotting, and in the postpartum, placental tearing releases substances that favor clotting. Oral contraceptives[b] and hormonal replacement therapy increase the risk through a variety of mechanisms, including altered blood coagulation protein levels and reduced fibrinolysis.[11]

The disease term venous thromboembolism (VTE) includes the development of either DVT orpulmonary embolism (PE).[15][16] Genetic factors that increase the risk of VTE include deficiencies of three proteins that normally prevent blood from clotting—protein C, protein S, and antithrombin—in addition to non-O blood type and mutations in the factor V and prothrombin genes. Deficiencies inantithrombin, protein C, and protein S are rare but strong, or moderately strong, risk factors.[9][11] These three thrombophilia[c] increase the risk of VTE by about 10 times.[17] Factor V Leiden, which makes factor V resistant to inactivation by activated protein C,[19] and the genetic variant prothrombin G20210A, which causes increased prothrombin levels, are predominantly expressed in Caucasians.[9][d] They moderately increase risk for VTE, by three to eight times for factor V Leiden and two to three times for prothrombin G20210A.[17][20] Having a non-O blood type approximately doubles VTE risk.[11] Non-O blood type is common in all races, making it an important risk factor.[21]Individuals without O blood type have higher blood levels of von Willebrand factor and factor VIII than those with O blood type, increasing the likelihood of clotting.[21]

Some risk factors influence the location of DVT within the body. In isolated distal DVT, the profile of risk factors appears distinct from proximal DVT. Transient factors, such as surgery and immobilization, appear to dominate whereas thrombophilias and age do not seem to increase risk.[22] In upper-extremity DVT, the most important risk factor is having a central venous catheter, and thoracic outlet syndromealso increases risk.

Deep vein thrombosis signs and symptoms can include:

Deep vein thrombosis may sometimes occur without any noticeable symptoms.

If you develop signs or symptoms of deep vein thrombosis, contact your doctor for guidance.

If you develop signs or symptoms of a pulmonary embolism — a life-threatening complication of deep vein thrombosis — seek medical attention immediately.

The warning signs of a pulmonary embolism include:

Deep vein thrombosis (DVT) is a blood clot that develops within a deep vein in the body, usually in the leg.

Blood clots that develop in a vein are also known as venous thrombosis.

DVT usually occurs in a deep leg vein, a larger vein that runs through the muscles of the calf and the thigh.

It can cause pain and swelling in the leg and may lead to complications such as pulmonary embolism. This is a serious condition that occurs when a piece of blood clot breaks off into the bloodstream and blocks one of the blood vessels in the lungs (see below).

DVT and pulmonary embolism together are known as venous thromboembolism (VTE).

In some cases, there may be no symptoms of DVT. If symptoms do occur they can include:

DVT usually (although not always) affects one leg. The pain may be worse when you bend your foot upward towards your knee.

Both DVT and pulmonary embolism require urgent investigation and treatment.

Seek immediate medical attention if you have pain, swelling and tenderness in your leg and you develop breathlessness and chest pain.

Read more about the complications of DVT.

Each year, DVT affects around one person in every 1,000 in the UK.

Anyone can develop DVT, but it becomes more common over the age of 40. As well as age, there are also a number of other risk factors, including:

The combined contraceptive pill and hormone replacement therapy (HRT) both contain the female hormone oestrogen, which causes the blood to clot more easily. If you’re taking either of these, your risk of developing DVT is slightly increased.

Read more about the causes of DVT.

See your GP as soon as possible if you think you may have DVT – for example, if you have pain, swelling and a heavy ache in your leg. They’ll ask you about your symptoms and medical history.

It can be difficult to diagnose DVT from symptoms alone, so your GP may advise that you have a specialised blood test called a D-dimer test.

This test detects pieces of blood clot that have been broken down and are loose in your bloodstream. The larger the number of fragments found, the more likely it is that you have a blood clot in your vein.

However, the D-dimer test isn’t always reliable because blood clot fragments can increase after an operation, injury or during pregnancy. Additional tests, such as an ultrasound scan, will need to be carried out to confirm DVT.

An ultrasound scan can be used to detect clots in your veins. A special type of ultrasound called a Doppler ultrasound can also be used to find out how fast the blood is flowing through a blood vessel. This helps doctors identify when blood flow is slowed or blocked, which could be caused by a blood clot.

A venogram may be used if the results of a D-dimer test and ultrasound scan can’t confirm a diagnosis of DVT.

During a venogram, a liquid called a contrast dye is injected into a vein in your foot. The dye travels up the leg and can be detected by X-ray, which will highlight a gap in the blood vessel where a clot is stopping the flow of blood. 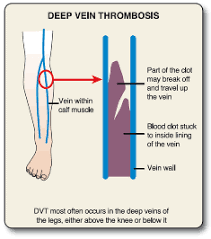 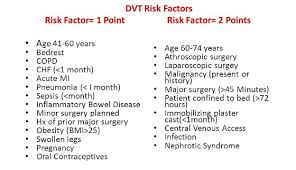 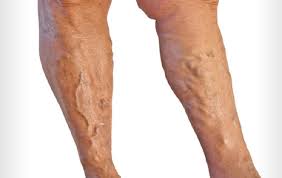 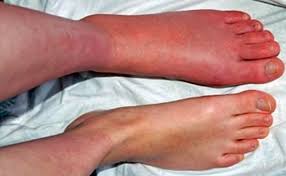 Heparin and warfarin are two types of anticoagulant often used to treat DVT. Heparin is usually prescribed first because it works immediately to prevent further clotting. After initial treatment, you may also need to take warfarin to prevent another blood clot forming.

A number of anticoagulants, known as directly acting oral anticoagulants (DOACs), may also be used to treat conditions such as DVT. These medications include rivaroxaban and apixaban, and they’ve been shown to be as effective as heparin and warfarin with less serious side effects.

You’ll also be prescribed compression stockings to wear every day, which will improve your symptoms and help prevent complications.

If you need to go into hospital for surgery, a member of your care team will assess your risk of developing a blood clot while you’re there.

If you’re at risk of developing DVT, there are a number of things you can do to prevent a blood clot occurring, both before you go into hospital, such as temporarily stopping taking the combined contraceptive pill, andwhile you’re in hospital, such as wearing compression stockings.

When you leave hospital, your care team may also make a number of recommendations to help prevent DVT returning or complications developing. These may include:

There’s no evidence to suggest that taking aspirin reduces your risk of developing DVT.

See your GP before embarking on long-distance travel if you’re at risk of getting a DVT, or if you’ve had a DVT in the past.

When taking a long-distance journey (six hours or more) by plane, train or car, you should take steps to avoid getting DVT, such as drinking plenty of water, performing simple leg exercises and taking regular, short walking breaks. 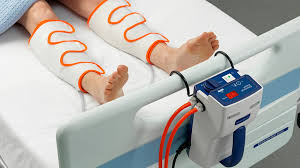 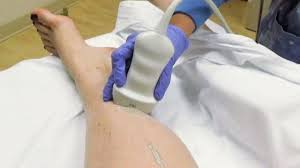