Autism spectrum disorder (ASD) and autism are both general terms for a group of complex disorders of brain development. These disorders are characterized, in varying degrees, by difficulties in social interaction, verbal and nonverbal communication and repetitive behaviors. With the May 2013 publication of the DSM-5 diagnostic manual, all autism disorders were merged into one umbrella diagnosis of ASD. Previously, they were recognized as distinct subtypes, including autistic disorder, childhood disintegrative disorder, pervasive developmental disorder-not otherwise specified (PDD-NOS) and Asperger syndrome.

ASD can be associated with intellectual disability, difficulties in motor coordination and attention and physical health issues such as sleep and gastrointestinal disturbances. Some persons with ASD excel in visual skills, music, math and art.

Autism appears to have its roots in very early brain development. However, the most obvious signs of autism and symptoms of autism tend to emerge between 2 and 3 years of age. Autism Speaks continues to fund research on effective methods for earlier diagnosis, as early intervention with proven behavioral therapies can improve outcomes. Increasing autism awareness is a key aspect of this work and one in which our families and volunteers play an invaluable role.

Not long ago, the answer to this question would have been “we have no idea.” Research is now delivering the answers. First and foremost, we now know that there is no one cause of autism just as there is no one type of autism. Over the last five years, scientists have identified a number of rare gene changes, or mutations, associated with autism. A small number of these are sufficient to cause autism by themselves. Most cases of autism, however, appear to be caused by a combination of autism risk genes and environmental factors influencing early brain development.

In the presence of a genetic predisposition to autism, a number of nongenetic, or “environmental,” stresses appear to further increase a child’s risk. The clearest evidence of these autism risk factors involves events before and during birth. They include advanced parental age at time of conception (both mom and dad), maternal illness during pregnancy and certain difficulties during birth, particularly those involving periods of oxygen deprivation to the baby’s brain. It is important to keep in mind that these factors, by themselves, do not cause autism. Rather, in combination with genetic risk factors, they appear to modestly increase risk.

A growing body of research suggests that a woman can reduce her risk of having a child with autism by taking prenatal vitamins containing folic acid and/or eating a diet rich in folic acid (at least 600 mcg a day) during the months before and after conception.

Increasingly, researchers are looking at the role of the immune system in autism. Autism Speaks is working to increase awareness and investigation of these and other issues, where further research has the potential to improve the lives of those who struggle with autism.

How Common Is Autism?

Large and long-standing atrial septal defects can damage your heart and lungs. Small defects may never cause a problem and may be found incidentally. An adult who has had an undetected atrial septal defect for decades may have a shortened life span from heart failure or high blood pressure that affects the arteries in the lungs (pulmonary hypertension). Surgery may be necessary to repair atrial septal defects to prevent complications.

Many babies born with atrial septal defects don’t have associated signs or symptoms. In adults, signs or symptoms usually begin by age 30, but in some cases signs and symptoms may not occur until decades later.

Atrial septal defect signs and symptoms may include:

Contact your doctor if you or your child has any of these signs or symptoms:

These could be signs or symptoms of heart failure or another complication of congenital heart disease.

Autism spectrum disorder (ASD) is a group of conditions that cause people to have difficulties with social communication, to have narrow interests and repetitive behaviours, or to be over-sensitive or under-sensitive to taste, touch, sight or sounds.

Autism spectrum disorder (ASD) is a brain-based condition – that is, where the brain hasn’t developed in a typical way. Although no two children with ASD are the same, they all face challenges in interacting and communicating with others. And they also have either a narrow range of interests or engage in repetitive activities.

We don’t know exactly what causes autism spectrum disorder (ASD). But the latest research shows that in children with ASD: 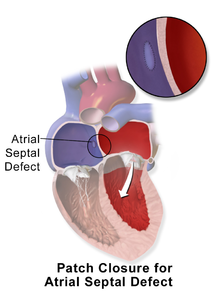 Once someone is found to have an atrial septal defect, a determination of whether it should be corrected has to be made.

Surgical mortality due to closure of an ASD is lowest when the procedure is performed prior to the development of significant pulmonary hypertension. The lowest mortality rates are achieved in individuals with a pulmonary artery systolic pressure of less than 40 mmHg.

If Eisenmenger’s syndrome has occurred, there is significant risk of mortality regardless of the method of closure of the ASD. In individuals who have developed Eisenmenger’s syndrome, the pressure in the right ventricle has raised high enough to reverse the shunt in the atria. If the ASD is then closed, the afterload that the right ventricle has to act against has suddenly increased. This may cause immediate right ventricular failure, since it may not be able to pump the blood against the pulmonary hypertension.

Closure of an ASD in individuals under age 25 has been shown to have a low risk of complications, and individuals have a normal lifespan (comparable to a healthy age-matched population). Closure of an ASD in individuals between the ages of 25 and 40 who are asymptomatic but have a clinically significant shunt is controversial. Those that perform the procedure believe that they are preventing long-term deterioration in cardiac function and preventing the progression of pulmonary hypertension.

Methods of closure of an ASD include surgical closure and percutaneous closure.

Although invasive, surgical closure is particularly beneficial because additional drug therapy is not needed.[29] This is considered to be the gold standard to prevent PFO and paradoxical embolism.[29]

Percutaneous device closure involves the passage of a catheter into the heart through the femoral vein guided by fluoroscopy and echocardiography.[16] An example of a percutaneous device is the Cardia PFO occluder which has discs that can expand to a variety of diameters at the end of the catheter.[30] The catheter is placed in the right femoral vein and guided into the right atria.[30] The catheter is guided through the atrial septal wall and one disc (left atrial) is opened and pulled into place.[30] Once this occurs, the other disc (right atrial) is opened in place and the device is inserted into the septal wall.[30] This type of PFO closure is more effective than drug or other medical therapies for decreasing the risk of future thromboembolism.[16]

Drug therapy can be used to minimize risk of thromboembolism and stroke in PFO. Anticoagulants, such as warfarin, are commonly used to reduce blood clotting, whereas antiplatelet agents, such as aspirin, to reduce platelet aggregation and thrombosis.[17]

Evaluation prior to correction

Prior to correction of an ASD, an evaluation is made of the severity of the individual’s pulmonary hypertension (If present at all) and whether it is reversible (Closure of an ASD may be recommended for prevention purposes, to avoid such a complication in the first place. Pulmonary hypertension is not always present in adults that are diagnosed with an ASD in adulthood).

If pulmonary hypertension is present, the evaluation may include a right heart catheterization. This involves placing a catheter in the venous system of the heart and measuring pressures and oxygen saturations in the SVC, IVC, right atrium, right ventricle, pulmonary artery, and in the wedge position. Individuals with a pulmonary vascular resistance (PVR) of less than 7 wood units show regression of symptoms (including NYHA functional class). On the other hand, individuals with a PVR of greater than 15 wood units have increased mortality associated with closure of the ASD.

Until the early 1990s, surgery was the usual method for closing all ASDs. Now, thanks to medical advances, doctors can use catheterprocedures to close secundum ASDs, the most common type of ASD. During the procedure, the doctor inserts a catheter (a thin, flexible tube) into a vein in the groin (upper thigh) and threads it to the heart’s septum. The catheter has a tiny umbrella-like device folded up inside it. When the catheter reaches the septum, the device is pushed out of the catheter and positioned so that it plugs the hole between the atria. The device is secured in place and the catheter is withdrawn from the body. Within 6 months, normal tissue grows in and over the device. There is no need to replace the closure device throughout the patient’s life. Doctors often use echocardiography (echo) or transesophageal echo (TEE) as well as angiography to guide them in threading the catheter to the heart and closing the defect. TEE is a special type of echo that takes pictures of the heart through the esophagus (the passage leading from the mouth to the stomach). Catheter procedures are much easier on patients than surgery because they involve only a needle puncture in the skin where the catheter is inserted. This means that recovery is faster and easier. The outlook for patients having this procedure is excellent. Closures are successful in more than 9 out of 10 patients, with no significant leakage. Rarely, a defect is too large for catheter closure and surgery is needed.

Due to the communication between the atria that occurs in ASDs, disease entities or complications from the condition, are possible. Patients with an uncorrected atrial septal defects may be at increased risk for developing a cardiac arrhythmia, as well as more frequent respiratory infections.[22]

If a net flow of blood exists from the left atrium to the right atrium, called a left-to-right shunt, then there is an increase in the blood flow through the lungs. Initially, this increased blood flow is asymptomatic, but if it persists, the pulmonary blood vessels may stiffen, causing pulmonary hypertension. The pulmonary hypertension increases the pressures in the right side of the heart, leading to the reversal of the shunt into a right-to-left shunt. Once the reversal of the shunt occurs, and the blood begins flowing in the opposite direction through the ASD, that is called Eisenmenger’s syndrome. The syndrome is a rare and late complication of an ASD.

Venous thrombus (clots in the veins) are quite common. Embolizations (dislodgement of thrombi) normally go to the lung and causepulmonary emboli. In an individual with ASD, these emboli can potentially enter the arterial system. This can cause any phenomenon that is attributed to acute loss of blood to a portion of the body, including cerebrovascular accident (stroke), infarction of the spleen or intestines, or even a distal extremity (i.e., finger or toe).

This is known as a paradoxical embolus because the clot material paradoxically enters the arterial system instead of going to the lungs.

Some recent research has suggested that a proportion of cases of migraine may be caused by patent foramen ovale. While the exact mechanism remains unclear, closure of a PFO can reduce symptoms in certain cases.[34][35] This remains controversial. 20% of the general population have a PFO, which for the most part, is asymptomatic. 20% of the female population have migraines. And, the placebo effect in migraine typically averages around 40%. The high frequency of these facts makes statistically significant relationships between PFO and migraine difficult (i.e., the relationship may just be chance or coincidence). In a large randomized controlled trial the higher prevalence of patent foramen ovale in migraine patients was confirmed, but migraine headache cessation was not more prevalent in the group of migraine patients that underwent closure of their patent foramen ovale.

Surgical closure of an ASD involves opening up at least one atrium and closing the defect with a patch under direct visualization.